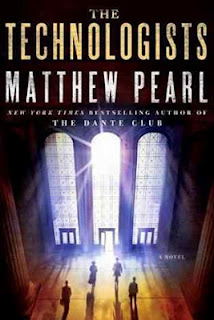 Its proud lines intermittently visible through the early morning fog, the Light of the East might have been the most carefree ship that ever floated into . Some of the sailors, their bearded faces browned and peeling from too much sun, cracked the last rations of walnuts in their fists or under their boot heels, singing some ancient song about a girl left behind. After wild March winds, stormy seas, dangerous ports, backbreaking work, and all the extremes of experience, they’d be handed a good pay at port, then freed to lose it to the city’s myriad pleasures.

Set in nineteenth-century Boston, The Technologists traces the misadventures of the first class at M.I.T. Unlike now, though, M.I.T. does not have any prestige – in fact the very word technology is more likely to terrify than electrify the people. In the midst of a brutal fight for the school’s very soul, a group of scholars led by “charity scholar” Marcus Mansfield try to solve the mystery behind a series of deadly disasters that devastate the heart of the city of Boston.  Fighting against the very people they are trying to save, as well as a shadowy figure determined to bring the city to its knees, the Technologists must find a way of proving their innocence if their future is to have any chance of surviving.

The Technologists flew onto my radar the moment I heard about it. I have read and loved all three of Mr Pearl’s previous historical novels and have shared them with members of my family. Again, I was looking for something different to delve into after Blue Remembered Earth’s science fictional sense of wonder. The Technologists delivered, although I found it slightly less enthralling that I had the previous novels.

The mystery side of things works very well – I had no idea of who the culprit was until the reveal at the end of the book. Seeing the characters struggle to understand what is going on using science and deduction made for surprisingly gripping reading. As they realize the true dangers involved and their enemy continues to threaten greater and greater tragedies, the tension becomes palpable, leading to an explosive ending.

That ending did seem a little convoluted and extraordinary, but if you can suspend your belief enough it works. Especially if you imagine it happening up on a big screen!

All in all, I thoroughly enjoyed this new Matthew Pearl book. If anyone reads and enjoys this, I would encourage you to delve into his other novels, especially The Dante Club which is more of a murder/serial killer mystery. I gave this 3 and a half women in a glass coffins out of 5.

From the Blogosphere:
NY Times
Under My Apple Tree
Jenns Book Shelves 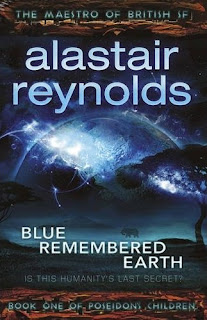 It is necessary to speak of beginnings. Understand one thing, though, above all else. Whatever brought us to this moment, this declaration, could never have had a single cause. If we have learned anything, it’s that life is never that simple, never that schematic.


Geoffrey Akinya and his sister Sunday have spent their whole lives trying to escape from the family business – Geoffrey by becoming a renowned student of elephant behaviour, Sunday by fleeing to the Moon colonies. However, both of them find themselves dragged back into that life they have tried to escape after the death of their grandmother, an explorer and entrepreneur, brings to light something that may be awkward for the family to deal with. After a trip to the moon almost ends with an international incident, the story branches out, taking us both under the Earth’s oceans and to the distant planet Mars. Throughout, Mr Reynolds throws idea after idea our way, painting an intriguing future solar system while his story builds to a climax that opens the story up for the following volumes of the trilogy.


Blue Remembered Earth was one of a number of books on my TBR list for this year, part of my attempt to read more recently released novels than I have in prior years. I picked it up straight after Throne of the Crescent Moon as it was a completely different vibe than that sword and sorcery novel. I actually started it a month before but it didn’t grab me as I had hoped. I dipped in and out of it until eventually deciding to give it my whole attention. Once I did, I found myself dragged into the story and finished it in a couple of days.


The story takes a while to get going. Parts of the novel (the trip to the Moon, for example) seem to have been padded out somewhat, while the character of Geoffrey remains… flat. He lacks any kind of drive and seems to spend the vast majority of the book trying to avoid doing anything but look after his elephants. It felt like a major event towards the end of the book which eventually pushes him into a more active role could have happened sooner.


All in all, this is one of Alastair Reynold’s most accessible books. If you enjoy this, you will likely go on to enjoy his vaster Revelation Space sequence, which is darker and has a more depressing take on humanity’s future. I look forward to seeing how the Akinya saga will develop in the next two books, the first of which is currently planned in sometime next year. I gave this 3 and a half tiny, tiny, cyborg elephants out of 5.

From the Author’s Mouth:

I couldn’t find any recent interviews from Mr Reynolds, but here is one in which he talks about the 11k sequence:
SF Signal Interview
Publié par Joel à 13:44 Aucun commentaire:

Throne of the Crescent Moon 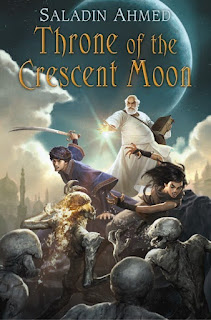 "Nine days. Beneficent God, I beg you, let this be the day I die!
The guardsman’s spine and neck were warped and bent but still he lived. He’d been locked in the red lacquered box for nine days. He’d seen the days’ light come and go through the lid-crack. Nine days."

Throne of the Crescent Moon by Saladin Ahmed is one of those books that you will have heard of if you spend any time whatsoever on genre book review blogs. It has had a lot of good press revolving firstly around Saladin Ahmed’s prior experience as a lauded short story writer and secondly around the quality of the book itself. As such I’ve had it on my TBR list for a little while and after finishing a handful of long books I decided to give it a try as a short-sweet change of pace.


Described by most of the blog reviews I have seen as sword-and-sorcery (shouldn’t that be scimitar-and-sorcery?), Throne of the Crescent Moon is one of my first experiences with the sub-genre. Beyond a couple of David Gemmell books I read and enjoyed a few years ago, I haven’t read much. From the experience of reading this one, though, I think it is a sub-genre I may need to spend more time on!


The Crescent Moon Kingdoms, land of djenn and ghuls, holy warriors and heretics, Khalifs and killers, is at the boiling point of a power struggle between the iron-fisted Khalif and the mysterious master thief known as the Falcon Prince.  In the midst of this brewing rebellion a series of brutal supernatural murders strikes at the heart of the Kingdoms. It is up to a handful of heroes to learn the truth behind these killings:

Doctor Adoulla Makhslood, "The last real ghul hunter in the great city of ," just wants a quiet cup of tea.  Three score and more years old, he has grown weary of hunting monsters and saving lives, and is more than ready to retire from his dangerous and demanding vocation. But when an old flame's family is murdered, Adoulla is drawn back to the hunter's path.

Raseed bas Raseed, Adoulla's young assistant, a hidebound holy warrior whose prowess is matched only by his piety, is eager to deliver God's justice. But even as Raseed's sword is tested by ghuls and manjackals, his soul is tested when he and Adoulla cross paths with the tribeswoman Zamia.

Zamia Badawi, Protector of the Band, has been gifted with the near-mythical power of the Lion-Shape, but shunned by her people for daring to take up a man's title. She lives only to avenge her father's death. Until she learns that Adoulla and his allies also hunt her father's killer. Until she meets Raseed.

When they learn that the murders and the Falcon Prince's brewing revolution are connected, the companions must race against time--and struggle against their own misgivings--to save the life of a vicious despot.  In so doing they discover a plot for the Throne of the Crescent Moon that threatens to turn Dhamsawaat, and the world itself, into a blood-soaked ruin.


One of the book’s main appeals for me was the character of Adoulla. While Raseed and Zamia remain relatively bog-standard young heroes following the classic coming-of-age storyline (with some neat tweaks to their relationship by the end that I didn’t necessarily expect), Adoulla is an old, fat, cynical hero reaching the end of his tether and looking forward to retiring. Unfortunately, retiring from being a ghul hunter is not as easy as retiring from a desk job. Throughout the novel, we follow Adoulla’s attempts to find a way out that will let him free himself from his calling while also doing the right thing regarding the menace hovering over the city of .


That menace is relatively ill defined throughout the novel, and by the time the reveal is made it seems a little tagged on. Still, it does set up a race against time that ups the tempo of the novel considerably, throwing action scenes, twists and character surprises at us from every direction. Mr. Ahmed does not avoid forcing his characters to face the consequences of their decisions, and each of them pays a price by the end.


In terms of worldbuilding, I found Mr. Ahmed did a good job of creating a really oriental, Arabian Nights vibe. However, the city of did not come across as the fully realised world that it could have been. Now that could conceivably be because I had just come off reading all three of Mark Charan Newton’s Villjamur novels, difficult to beat in terms of off the wall world building and creative city creation.


The magic in the novel was well thought out and intriguing. I look forward to learning more about djenn, ghulls and the other magical creatures that Mr. Ahmed has created.


What I wasn’t necessarily expecting beyond the worldbuilding and the characters was the humour with which Mr. Ahmed infuses his novel. Whether riffing off of Adoulla’s teasing of straight-laced Raseed or the cringe-worthy tension between Raseed and Zamia, the humour acts as a counterbalance to some of the darker or slower moments in the novel.


Overall, Throne of the Crescent Moon does the job of any first novel (both in a series and as a debut): It leaves you wanting more. I for one am looking forward to returning to Dhamsawaat and discovering how things have progressed for Adoulla, Raseed and Zamia. I give this 3 old fart’s looking to retire out of 5.

From the Author's Mouth: